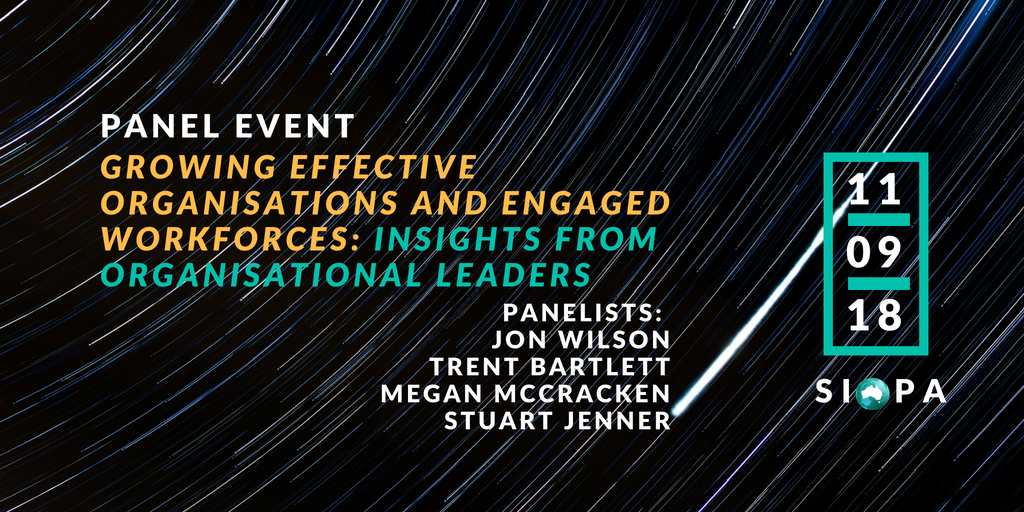 The Society for Industrial and Organisational Psychology Australia is proud to present its second annual leader panel event to highlight the needs and perspectives of organisational leaders who are responsible and accountable for achieving results and supporting the well-being and growth of their people.

Jon is an organisational development specialist who works with medium and large organisations to enhance organisational and people outcomes. He has managed improvement and change projects in Australia and overseas across a range of industries. He has a Masters in Organisational Psychology and is also a Certified Management Consultant and a Graduate of the Australian Institute of Company Directors. Jon is a Director of Management Consulting firm 3Pillars Asia Pacific and Managing Director in Australia for Blue Provident, who specialise in survey-based measurement and organisational assessment. Jon has over 20 years of experience as a practicing Psychologist, including 13 years as a self-employed independent consultant.

Trent has over 18 years of extensive multi-industry Chair / Independent Director / Executive Director and CEO level leadership and experience in multiple company forms with diverse business models and scale across many industry sectors.

With a speciality in member owned/member governed businesses – Trent currently sits on 5 commercial Boards for some of Australia’s most successful co-operatives, mutuals and associations across 3 states – chairing 2 of them.

Trent is a former CEO of Capricorn Society, one of Australia’s largest and most successful cooperative enterprises, as well as having a 15-year General Management career in Australia’s largest retailers. He holds postgraduate qualifications in business and e-commerce, a Faculty Member and Fellow of the AICD.

Megan McCracken (Experienced Executive, Owner of Pleiades.Global and Chair of the National Association of Women in Operations)

Megan is a strategic thinker and problem solver with almost 30 years’ experience in industrial and operating businesses across Australia in resources, automotive, energy and rail, with almost 10 years at an executive level where Megan led portfolios in Operational and People Safety, Environment, Corporate Affairs, Human Resources and Training.

Megan is an active supporter of workplace diversity and has mentored over 15 women in the last five years and she is the Chair of the National Association of Women in Operations (NAWO) – Australia’s peak body with a vision that men and women can be equally represented and valued at every level in operational businesses.

Stuart Jenner has had a diverse career, originally commencing as a Software Engineer, where he did not feel any purpose, connection or satisfaction, so he joined the Australian Defence Force as an Officer, holding senior leadership roles across Australia and overseas. This included leading border protection operations and a deployment to the Middle Eastern Area of Operation in 2004 as the Officer-in-Charge of Force Protection for the Australian Task Group.

Stuart has also held senior leadership roles across numerous industries including Government, Construction, Management Consulting, Mining and Resources in Australia and overseas. His senior People Capability roles include being the Executive General Manager – People Capabilities with Emeco Group and People Transformation Change Management with Newcrest Mining. Stuart is currently the General Manager of Capability and Culture with Gold Road Resources, where his portfolio includes Strategy, Risk, People & Culture and Health, Safety & Environment. Stuart is a Fellow of the Australian Institute of Management and a Board Director with the Gold Industry Group.

Stuart is passionate about health and wellbeing as an integral foundation for Unlocking Potential and achieving Peak Performance for individuals, teams and organisations.