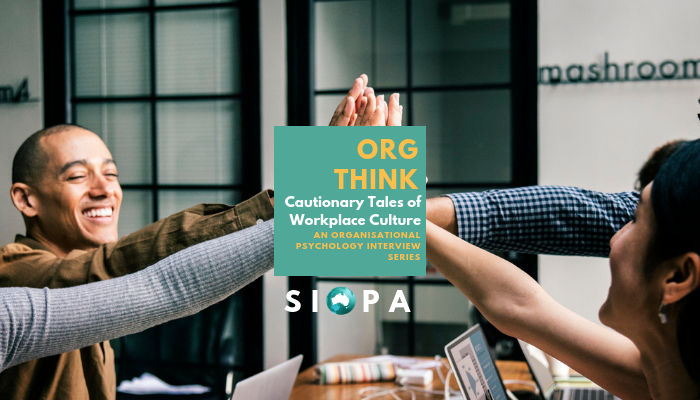 Psychologist Jon Wilson is certainly no stranger to change in organisations.

Director of 3Pillars Asia Pacific, Jon specializes in the review and development of people systems and organisational processes, to enhance the level of performance organisations can achieve through their people.  He has extensive experience in research and analysis or organisational and management issues, as well as an expertise in the measurement of workplace culture.

After we welcomed Jon on as a SIOPA board member in 2017, we had the privilege of interviewing him about his areas of expertise, in which we asked him if he had any ‘cautionary tales’ or case studies when it comes to organisational culture change.

He starts by speaking about failure:

CAUTIONARY TALE 1: NEVER UNDERESTIMATE THE POWER OF A STRONG CULTURE

One of our less successful projects – not in terms of the work that we did, but more in terms of the outcomes – came about when a client asked us to do a review of their business. We measured a lot of their current state:  We looked at what their issues were and got to the root of the problem – it was a rational approach.

The situation was quite clear: They were losing a lot of money. There was a lot of waste in the business, even within their everyday operational processes. They were doing a lot of things that were wasteful – and therefore they could not provide a compelling value proposition to their customers. They were starting to lose the confidence of their customers. We provided a report regarding the processes that could change to turn performance around, without any capital expenditure, along with structural changes that would enable them to operate more effectively with no changes to the staffing levels; they also needed to clarify roles to better manage their process – these were the improvements we recommended. They had a new CEO who looked at it with fresh eyes, and agreed with our recommendations – but they had existing, engrained leaders who had been there for a long time and who insisted they knew the business.  Despite the ongoing opportunity for involvement in the review process, and transparency throughout, they were resistant to the process and avoided making any changes. In reality, their business, as it was, could not be sustained. They can see that- it’s in the numbers, yet they did not accept the recommendations and did not make the changes they needed to make.

Unfortunately, 6 months later, they had to close that part of the business. The culture norms that existed in the organization were very powerful. As a consultant in the I/O psychology field, you’ve got some intent to break those cultural barriers down – in fact, we did get a lot of trust, input and involvement from middle managers down, but the senior leaders actually did not support that. So the hierarchy took over, the culture prevailed, and the business ultimately failed as a result.

CAUTIONARY TALE 2: IT’S PEOPLE VS PROCESS WHEN IT COMES TO CULTURE CHANGE.

Here’s another example: We were measuring the Safety Culture within a small part of a well-known organisation, in order to help this group of people manage risks and actively manage employee safety.

In the beginning, they weren’t getting great results –  they struggled to get their head around the behavioural change they had to make – and how they could sustain that in the long-term. So, for the first 18 months, they made a lot of effort to do so but found very little change.  However, that effort led them to establish some really positive norms, in which they started to value their people and relationships as well as the work they were producing.  They started to take a much more relationship-based and humanistic approach to their work – they put a whole range of different disciplines in place around that people-focus. They lifted performance substantially between their second and third years of that culture change effort. We continued to measure the safety climate in that group for 7 years.  From the 3rd year to 7th year, they retained only 20% of the same people because they rotate people out to different countries, and different operations – so the team they ended up within the 7th year was quite different from when they started – and yet, they sustained the same highly mature safety culture that was established in the third year.

That’s right, even when with the drastic changes in the make-up of their team – the culture stuck! What this tells us is that that the culture endures beyond the individuals.

We all want to see immediate, tangible results or benefits, but if we want to change the typical behaviours in a system of work, that has to be built and sustained over time.  The good news is, you do get results in the long run if you invest in it. Because when it works, it just sticks.

What organisations need to remember is that they often think that culture is a function of most people’s behaviour and choices, the individuals – but so much of what people do in an organisation is influenced, designed and guided by the organisation. So, if you look at any organisation, there are many systems, rules and processes in place that guide you to behaving in certain ways, regardless of your individual opinions. Every framework you have, every assessment you do, every KPI, every management review, are all ways that the organisation guides you. So, if the company wants to change the behaviour, not only do they have to appeal to the individuals, but they actually have to change their own practices and processes. If they don’t do that, they don’t get very far – then it reinforces this nebulous view that the “individuals don’t change”.

When the organisation’s systems and processes contradict the intended culture, their employees end up swimming are against the current. There’s only so much energy they have and then they stop trying. Culture can be very powerful but is often not tackled in an effective way.

SIOPA: Do you think there’s a rising awareness of a culture being an important aspect on how a company is run in the workforce today?

I think there’s strong recognition of the importance of culture – but I still don’t think there’s a very strong undersetting about how to influence it.

On the news, you always hear about culture when it comes to Silicon Valley and tech companies, such as having candy bars, bean bags, and other surface-level corporate culture elements. Do you think that might have skewed what people’s perception of what culture is?

The culture has to be relevant and appropriate to the type of organisation and type of people in it. So the Silicon Valley cultures are designed around innovation, creativity, and the diversity of the workforces that they need, whereas, other organisations – it wouldn’t necessarily benefit them to have the same symbols in place. So we are all tempted to look at Google’s innovation-focused culture as a comparison, but how relevant really is it to your organisation specifically?

Some organisations have to be very disciplined and focused, so you want to support people in different ways for that and creativity may not be the answer. Also, attracting highly creative people may not help to sustain interest and performance in a strict, disciplined-centric culture.  It doesn’t mean that the organisation has a poor culture- it just means it needs one that is fit for the company’s purpose and goals.