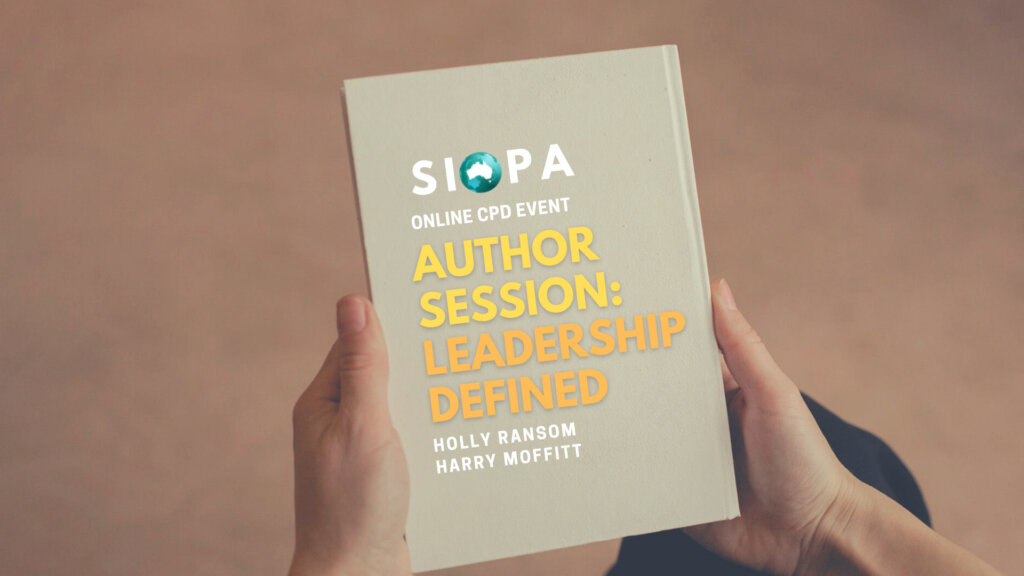 The Society for Industrial and Organisational Psychology Australia is proud to present our upcoming CPD event :

What does leadership look like today when we’re facing complexity and challenges in every direction? How do we help our leaders sustain their own energy as well as momentum for change? Why do nearly all linear cultural interventions fail?

SIOPA are pleased to invite former Australian SAS Team Commander, Harry Moffitt and one of Australia’s 100 Most Influential Women, Holly Ransom to discuss their views on building high-performing teams, organisational culture, and everything in between! From the sporting field, to the boardroom, to the battlefield, this session will leave you inspired, challenged and empowered to become a better Organisational Psychology professional. As renowned authors, Holly and Harry will discuss key themes from their respective books:

The Leading Edge is written for those who wake up every morning caring about being a better human, building a better world. It’s for those who are done with the status quo, who feel restless for a new tomorrow, today. The Leading Edge breaks open the notion that leadership is exclusive. It’s not. And in today’s world more than ever we simply cannot afford for it to be. ‘Leading from the edge’ means harnessing the state of mind, the processes, and the artistry that will arm leaders like you for impact.

An improvised game of cricket was often the circuit breaker Harry and his team needed after the tension of operations. He began a tradition of organising matches wherever he was sent and as part of the tradition, Harry also started to take a cricket bat with him on operational tours, eleven of them in total. Eleven Bats is a book about the healing power of cricket, and how a game can break down borders in even the most desperate of circumstances

REGISTER TO THE ONLINE EVENT HERE

Holly Ransom is a globally renowned content curator, powerful speaker and master interviewer with the belief that if you walk past it, you tell the world it’s okay. Named one of Australia’s 100 Most Influential Women by the Australian Financial Review, she has delivered a Peace Charter to the Dalai Lama, was Sir Richard Branson’s nominee for Wired Magazine’s ‘Smart List’ of Future Game Changers to watch and was awarded the US Embassy’s Eleanor Roosevelt Award for Leadership Excellence in 2019.

Former SAS team Commander Harry Moffitt recently retired after nearly 30yrs military service completing his time as the SAS Director of High-Performance. A registered psychologist, he is now the CEO of Stotan Group – a human performance consultancy – as well as a Director for the Mission Critical Teams Institute. Harry recently authored his memoir Eleven Bats about cricket and his active service in the SAS, during which he was wounded in action, in 2008. He is the ambassador for both The LBW Trust and the Wanderers Education Program amongst other commitments.